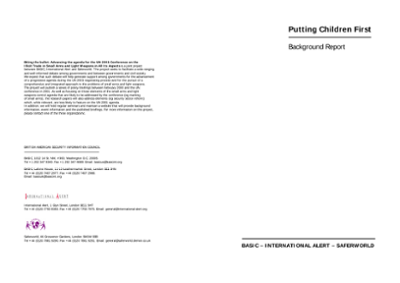 The purpose of this paper is to identify how the presence, proliferation, and misuse of small arms and light weapons (SALW) negatively impact children in conflict and post-conflict societies. It examines the impact of these weapons on children's well-being, rights and development, drawing on primary research in Cambodia, Mozambique, and Colombia. It was prepared in the context of the UN Conference on the Illicit Trade in Small Arms and Light Weapons in All Its Aspects in July 2001 and the UN Special Session on Children. Both are key opportunities to examine fully the impact of SALW on children at the international level and to agree global action to prevent and reduce the spread and misuse of the weapons that endanger the safety and undermine the potential of children. While UN agencies, international governmental organisations, human rights and development organisations have documented abuses committed against children, to date there has been no systematic analysis of the numerous ways in which SALW negatively affect the lives of children in conflict and post-conflict situations, let alone in societies at peace. However, the information that has been collected paints a terrible picture of devastation wrought by SALW. The use of small arms by and against children has both direct effects, which include death and injury, human rights abuses, displacement and psychosocial trauma, and indirect effects, which include insecurity, loss of health care, education and opportunities. These direct and indirect effects have both short and long-term impacts on the well-being, rights and development of children. This paper highlights these direct and indirect costs by drawing on the personal testimonies of youth affected by small arms in Cambodia, Mozambique, and Colombia - countries that have felt the devastating impacts of small arms and are currently at different phases of the recovery process. It is often extremely difficult to separate the impact of conflict from the impact of small arms on children but the human suffering caused by small arms is ultimately immeasurable. Indeed, the United Nations Secretary-General, Kofi Annan, has called small arms 'weapons of mass destruction' . These weapons often prolong and deepen the consequences of war and also impede post-conflict resolution and reconstruction. If many small arms remain behind after a conflict ends, they can promote insecurity, which in the extreme, may result in a return to conflict. Even in societies at peace, the presence of SALW can fuel crime and violence, and they can also be used by security forces for the facilitation of human rights violations against the civilian population. These weapons have several characteristics that make them ideal for contemporary conflicts and, in particular, the targeting and use of children in war. Many are so lightweight and simple that a child as young as eight can operate and repair them without difficulty. Equally, they can last over 40 years, meaning they can be exported from conflict to conflict through porous borders and lax national, regional, and international controls.