The importance of taste: a comparative study on wild food plant consumption in twenty-one local communities in Italy 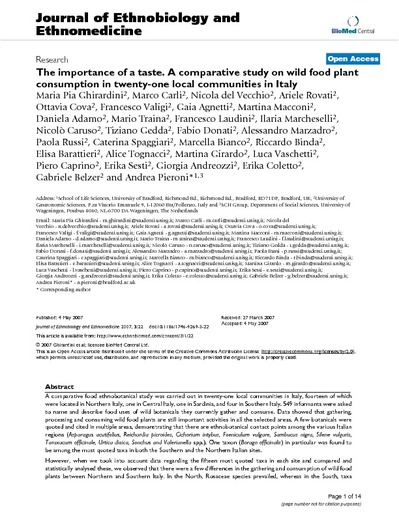 © 2007 Ghirardini et al. This is an Open Access article distributed under the terms of the Creative Commons Attribution License (http://www.creativecommons.org/licenses/by/2.0), which permits unrestricted use, distribution, and reproduction in any medium, provided the original work is properly cited.

A comparative food ethnobotanical study was carried out in twenty-one local communities in Italy, fourteen of which were located in Northern Italy, one in Central Italy, one in Sardinia, and four in Southern Italy. 549 informants were asked to name and describe food uses of wild botanicals they currently gather and consume. Data showed that gathering, processing and consuming wild food plants are still important activities in all the selected areas. A few botanicals were quoted and cited in multiple areas, demonstrating that there are ethnobotanical contact points among the various Italian regions (Asparagus acutifolius, Reichardia picroides, Cichorium intybus, Foeniculum vulgare, Sambucus nigra, Silene vulgaris, Taraxacum officinale, Urtica dioica, Sonchus and Valerianella spp.). One taxon (Borago officinalis) in particular was found to be among the most quoted taxa in both the Southern and the Northern Italian sites. However, when we took into account data regarding the fifteen most quoted taxa in each site and compared and statistically analysed these, we observed that there were a few differences in the gathering and consumption of wild food plants between Northern and Southern Italy. In the North, Rosaceae species prevailed, whereas in the South, taxa belonging to the Asteraceae, Brassicaceae, and Liliaceae s.l. families were most frequently cited. We proposed the hypothesis that these differences may be due to the likelihood that in Southern Italy the erosion of TK on wild vegetables is taking place more slowly, and also to the likelihood that Southern Italians' have a higher appreciation of wild vegetables that have a strong and bitter taste. A correspondence analysis confirmed that the differences in the frequencies of quotation of wild plants within the Northern and the Southern Italian sites could be ascribed only partially to ethnic/cultural issues. An additional factor could be recent socio-economic shifts, which may be having a continued effort on people's knowledge of wild food plants and the way they use them. Finally, after having compared the collected data with the most important international and national food ethnobotanical databases that focus on wild edible plants, we pointed out a few uncommon plant food uses (e.g. Celtis aetnensis fruits, Cicerbita alpine shoots, Helichrysum italicum leaves, Lonicera caprifolium fruits, Symphytum officinale leaves), which are new, or have thus far been recorded only rarely.