Implementing the UN Action Programme for Combating the Illicit Trafficking in Small Arms and Light Weapons in All Its Aspects. 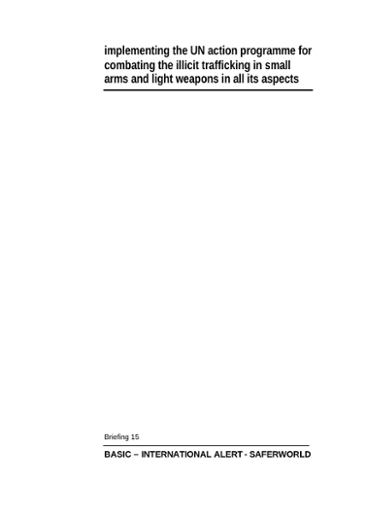 Historically, UN conferences have been criticised for resulting more in compromises than in commitments to real change, which is also a charge that has been levelled against the UN Conference on the Illicit Trade in Small Arms and Light Weapons in All Its Aspects (UN Small Arms Conference). The consensus-based approach adopted throughout the negotiations had the advantage of binding all participating States to all aspects of the agreed Programme of Action (PoA), but it also ensured that it would be difficult to achieve a sufficiently rigorous and comprehensive agreement on all of the measures required to tackle the trafficking, proliferation and misuse of small arms and light weapons (SALW). Therefore, in spite of the efforts of many governments and NGOs, the UN Small Arms Conference did not agree sufficiently robust agreements in several areas. Nonetheless, it was a valuable and productive process. The resulting PoA includes a reasonably comprehensive set of key principles and commitments, which provide a basis for taking forward action at national, regional and global levels. The PoAwas agreed by all of the participating States, amounting to more than 100, and each are politically bound to adopt and implement it. Given that the UN Small Arms Conference was the first of its kind, its achievement in generating political will and momentum for efforts to control SALW is important. Although many of the commitments are weaker and less comprehensive than hoped for by many governments and organisations, it is significant that the PoAcontains at least some important commitments in all but two of the `core¿ issue areas raised by States. The two exceptions relate to transfers to non-State actors and to civilian trade, possession and use of SALW, restrictions which were strongly opposed by the USA. Equally, human rights related issues were noteworthy by their absence in the PoA. Whilst the process of reaching agreement began with a far-reaching draft PoA in December 2000 (A/Conf.192/L.4), most of the comments that were tabled on this text during the second Preparatory Committee in January 2001 came from countries that sought to weaken its commitments. The subsequent draft (A/Conf.192/L.4/Rev.1) was therefore weaker, with the result that progressive States faced an uphill task in seeking to strengthen its provisions. The next draft PoA emerged at the UN Small Arms Conference itself in the form of a third draft (A/Conf.192/L.5). Although still limited in a number of key areas ¿ such as export criteria and transparency ¿ this document went further than L.4/Rev.1 in a number of respects and included specific international commitments, including on brokering and tracing lines of supply. This, however, proved too ambitious an agenda for a small group of States and in the end the document that was adopted by consensus (A/Conf.192/L.5/Rev.1) represented a lower-level compromise. Despite the difficulties of agreeing the consensus-based PoA, the process culminating in the agreement was perhaps as important as the agreement itself. UN Small Arms Conference represented the first time that all UN Member States had met to discuss the illicit trade in SALW in all its aspects with a view to agreeing a comprehensive set of measures to address the problem. Although many of the commitments contained in the PoAare couched in equivocal language that will allow States to do as much or as little as they like, it is clear that the UN Small Arms Conference has contributed to a much better understanding, amongst all stakeholders, of the nature of the illicit trade in SALW and of the particular concerns and priorities of different countries and sub-regions. It is also clear that although the Programme of Action provides a set of minimum standards and commitments which all states should adopt, it also encourages further action from all States willing to adopt more stringent commitments and stronger programmes. There is a willingness among a number of States to build upon the PoAand take more concrete and far-reaching measures at national, sub-regional, regional and international levels, such as specific arrangements for tracing co-operation, or mechanisms to co-ordinate e fforts to improve stockpile security or weapons destruction. This briefing provides a critical assessment of key provisions in the UN Small Arms Conference PoA. Section 1 measures the overall outcomes of the conference against those that the Biting the Bullet (BtB) project proposed as optimal conclusions, and suggests ways to put the commitments contained in the PoA into practice. Section 2 assesses the implementation and follow-up commitments contained in the PoA, and identifies ways of promoting the implementation of Sections III and IV, as well as options for making the most of the Biennial Meetings of States and the Review Conference in 2006. Section 3 examines funding and resourcing possibilities for the PoA including identifying needs, mobilising resources and matching needs with resources. The final section of the briefing focuses on the way forward, and in particular on how implementation of the PoA could build on existing regional initiatives and develop common international approaches to controlling SALW proliferation, availability and misuse. It also examines how action to prevent and combat the illicit trade in SALW in all its aspects can be taken forward at sub-regional and regional levels in conjunction with all major stakeholders, including civil society, in the period leading up to the first Review Conference.