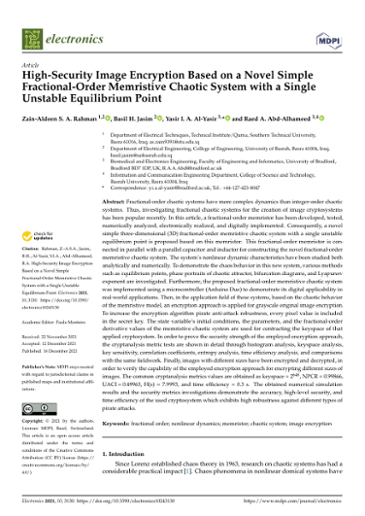 (c) 2021 The Authors. This is an Open Access article distributed under the Creative Commons CC-BY license (https://creativecommons.org/licenses/by/4.0/)

Fractional-order chaotic systems have more complex dynamics than integer-order chaotic systems. Thus, investigating fractional chaotic systems for the creation of image cryptosystems has been popular recently. In this article, a fractional-order memristor has been developed, tested, numerically analyzed, electronically realized, and digitally implemented. Consequently, a novel simple three-dimensional (3D) fractional-order memristive chaotic system with a single unstable equilibrium point is proposed based on this memristor. This fractional-order memristor is connected in parallel with a parallel capacitor and inductor for constructing the novel fractional-order memristive chaotic system. The system’s nonlinear dynamic characteristics have been studied both analytically and numerically. To demonstrate the chaos behavior in this new system, various methods such as equilibrium points, phase portraits of chaotic attractor, bifurcation diagrams, and Lyapunov exponent are investigated. Furthermore, the proposed fractional-order memristive chaotic system was implemented using a microcontroller (Arduino Due) to demonstrate its digital applicability in real-world applications. Then, in the application field of these systems, based on the chaotic behavior of the memristive model, an encryption approach is applied for grayscale original image encryption. To increase the encryption algorithm pirate anti-attack robustness, every pixel value is included in the secret key. The state variable’s initial conditions, the parameters, and the fractional-order derivative values of the memristive chaotic system are used for contracting the keyspace of that applied cryptosystem. In order to prove the security strength of the employed encryption approach, the cryptanalysis metric tests are shown in detail through histogram analysis, keyspace analysis, key sensitivity, correlation coefficients, entropy analysis, time efficiency analysis, and comparisons with the same fieldwork. Finally, images with different sizes have been encrypted and decrypted, in order to verify the capability of the employed encryption approach for encrypting different sizes of images. The common cryptanalysis metrics values are obtained as keyspace = 2648, NPCR = 0.99866, UACI = 0.49963, H(s) = 7.9993, and time efficiency = 0.3 s. The obtained numerical simulation results and the security metrics investigations demonstrate the accuracy, high-level security, and time efficiency of the used cryptosystem which exhibits high robustness against different types of pirate attacks.