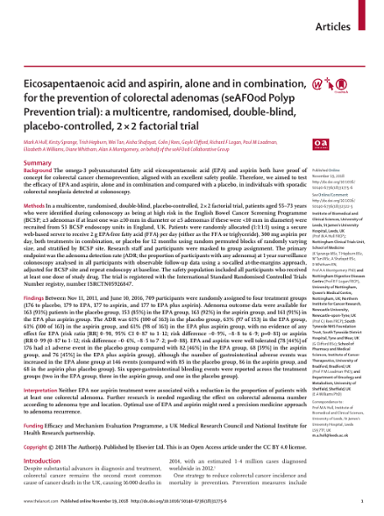 © 2018 The Author(s). Published by Elsevier Ltd. This is an Open Access article under the CC BY 4.0 license.

Background: The omega-3 polyunsaturated fatty acid eicosapentaenoic acid (EPA) and aspirin both have proof of concept for colorectal cancer chemoprevention, aligned with an excellent safety profile. Therefore, we aimed to test the efficacy of EPA and aspirin, alone and in combination and compared with a placebo, in individuals with sporadic colorectal neoplasia detected at colonoscopy. Methods: In a multicentre, randomised, double-blind, placebo-controlled, 2 × 2 factorial trial, patients aged 55–73 years who were identified during colonoscopy as being at high risk in the English Bowel Cancer Screening Programme (BCSP; ≥3 adenomas if at least one was ≥10 mm in diameter or ≥5 adenomas if these were <10 mm in diameter) were recruited from 53 BCSP endoscopy units in England, UK. Patients were randomly allocated (1:1:1:1) using a secure web-based server to receive 2 g EPA-free fatty acid (FFA) per day (either as the FFA or triglyceride), 300 mg aspirin per day, both treatments in combination, or placebo for 12 months using random permuted blocks of randomly varying size, and stratified by BCSP site. Research staff and participants were masked to group assignment. The primary endpoint was the adenoma detection rate (ADR; the proportion of participants with any adenoma) at 1 year surveillance colonoscopy analysed in all participants with observable follow-up data using a so-called at-the-margins approach, adjusted for BCSP site and repeat endoscopy at baseline. The safety population included all participants who received at least one dose of study drug. The trial is registered with the International Standard Randomised Controlled Trials Number registry, number ISRCTN05926847. Findings: Between Nov 11, 2011, and June 10, 2016, 709 participants were randomly assigned to four treatment groups (176 to placebo, 179 to EPA, 177 to aspirin, and 177 to EPA plus aspirin). Adenoma outcome data were available for 163 (93%) patients in the placebo group, 153 (85%) in the EPA group, 163 (92%) in the aspirin group, and 161 (91%) in the EPA plus aspirin group. The ADR was 61% (100 of 163) in the placebo group, 63% (97 of 153) in the EPA group, 61% (100 of 163) in the aspirin group, and 61% (98 of 161) in the EPA plus aspirin group, with no evidence of any effect for EPA (risk ratio [RR] 0·98, 95% CI 0·87 to 1·12; risk difference –0·9%, –8·8 to 6·9; p=0·81) or aspirin (RR 0·99 (0·87 to 1·12; risk difference –0·6%, –8·5 to 7·2; p=0·88). EPA and aspirin were well tolerated (78 [44%] of 176 had ≥1 adverse event in the placebo group compared with 82 [46%] in the EPA group, 68 [39%] in the aspirin group, and 76 [45%] in the EPA plus aspirin group), although the number of gastrointestinal adverse events was increased in the EPA alone group at 146 events (compared with 85 in the placebo group, 86 in the aspirin group, and 68 in the aspirin plus placebo group). Six upper-gastrointestinal bleeding events were reported across the treatment groups (two in the EPA group, three in the aspirin group, and one in the placebo group). Interpretation Neither EPA nor aspirin treatment were associated with a reduction in the proportion of patients with at least one colorectal adenoma. Further research is needed regarding the effect on colorectal adenoma number according to adenoma type and location. Optimal use of EPA and aspirin might need a precision medicine approach to adenoma recurrence.